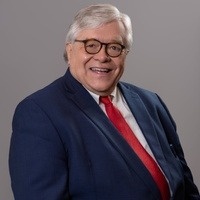 Lyman began his career in the wealth management industry in 1973. He opened the Hilliard Lyons office in Franklin, Indiana in 1974 and has remained with Hilliard Lyons and Baird his entire career. Lyman is a 1971 graduate of Franklin College.

Lyman and his wife Corbalou (Corbie) have been married for more than 51 years and are the proud parents of three children: Andy, Ginger, and Loren. They enjoy spending time with their family—and especially their grandchildren Benson, Marion, Coleman, and Lawson.

Lyman is an antique enthusiast and loves attending art and antique auctions, along with playing bridge and being active in his community. He’s a long-time supporter of the Johnson County Community Foundation, Franklin Rotary Club, Johnson County Humane Society, and the Johnson County Historical Society, where he currently serves on the Board of Directors. He and his wife Corbie are also members of the Columbus First Baptist Church, the Edinburgh Antique Club, and The Elks Lodge #1818.